Moving on with their presentation, the Team T5 experts delve into host privilege on Mac OS X in terms of the scope of permissions that a normal user can get. 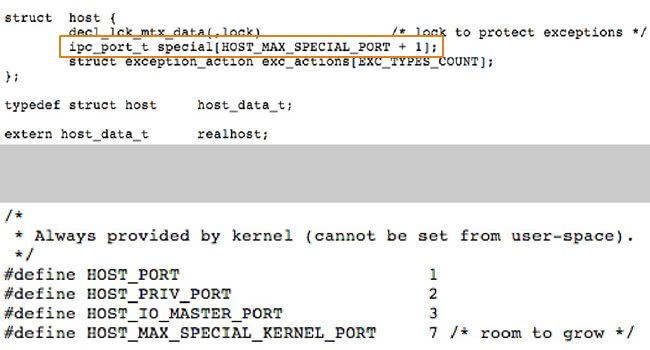 Okay, how to obtain host privilege? First, in kernel you have to find ‘_realhost’ from kernel (see image above). You parse kernel and find the symbol. And then, you need to find target task – the task you want to assign the permission, the privilege. And you need to assign this point, ‘_realhost->special[2]’, to task ‘itk_host’. Then this task has privilege, and there is no need to become root as it already has the privilege.

So, how do we implement our rootkit with host privilege? There are several ways, like system call hook and code patching. In the final slide I will show you how we do call patching to make rootkit with this function. So, we try to replace syscall table and then and then we find the address specified, and then we try to patch the code here (see image above). It is global effectiveness: to every user who wants to request permission – the rootkit will grant the permission without asking, without any checking. 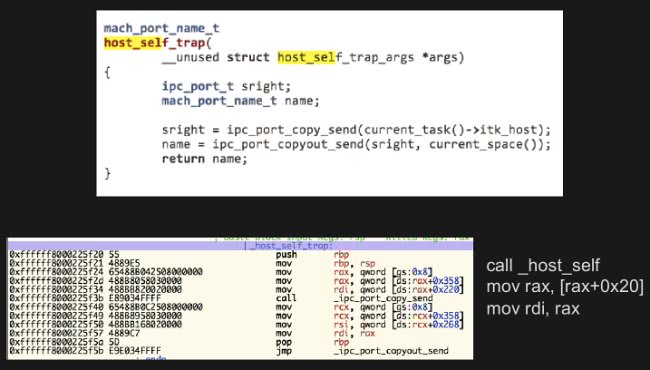 This function (see image above) is in charge of checking the host permission of the task. But we modify the code here. Then, the next time this function is called it will always give the permission.

Instead of code patching, which is difficult, we have a better way (see image above). This way is the easiest, undetectable by traditional detection and stable. How do we do this? Very simple (see image below).

We just find the host privilege object and then we specify 2 to 1 so that the normal host privilege is the same as special privilege. We call it “data patch”. If we patch this data, then it has global effectiveness and every user can have permission to load kernel module. 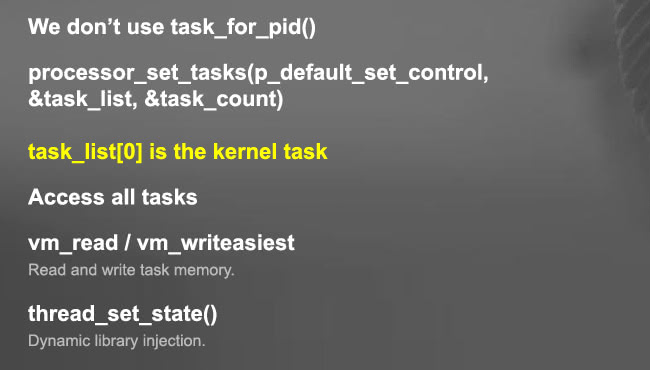 For direct task access (see image above) we don’t use task_for_pid(). Instead, we use processor_set_tasks. This API will return a task_list object, and this object is actually the kernel task. So from user mode, you call this function. You need the host privilege at least – and you can call this function. And after you call this function, you can get the kernel task. So, with task_list you can access all tasks from this list. Using this code, we can start to access all tasks and even use vm_read and vm_write to read and write task memory. And also, for example, we can use thread_set_state() for dynamic library injection. So, we make it happen again and we can directly access the kernel task.

Another thing with host privilege is a normal user can not only load kernel module – we are also going to show you how to bypass kernel module verification on Mac OS X 10.9. 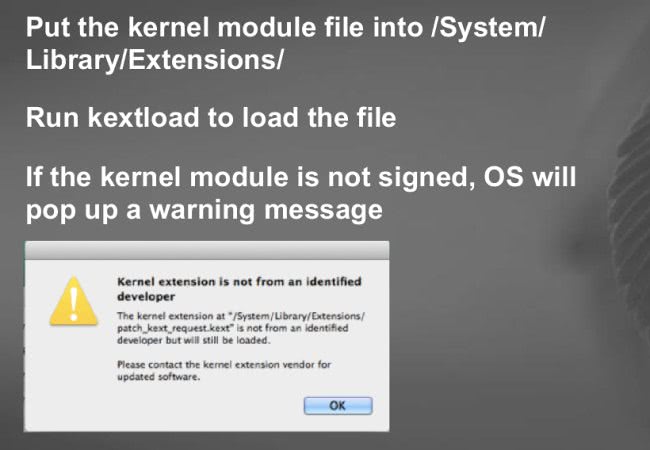 This (see image above) is the standard way of loading kernel module on Mac OS X 10.9. We put the kernel module file – it has to be a file – into the /System/Library/Extensions/ folder, and we run kextload to load the file. If the kernel module not signed, the OS will always pop up a warning message that it is a third-party kernel module. 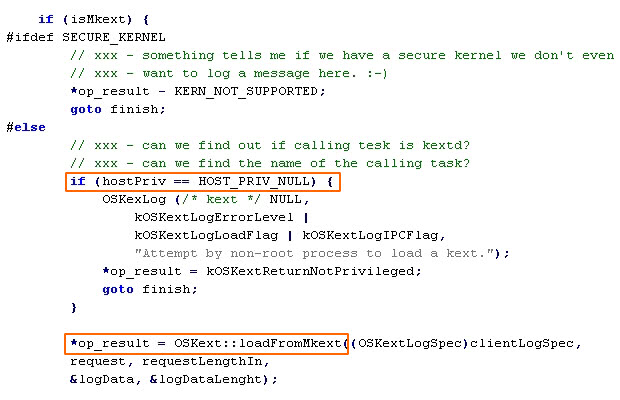 On this slide, you can see the source code (see image above). The code actually checks the host privilege, not your ID. With this host privilege you can start to load kernel module. One other important thing is you have to make your own mkext – it is the kernel module object. Here is the structure of the object and the sample of the plist (see image below). 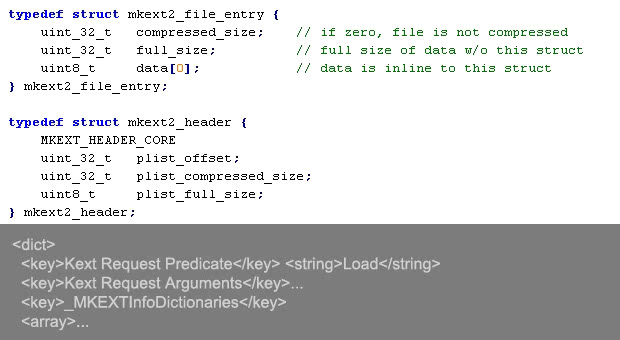 You have to follow the format and you have to specify the offset size. So follow the specs and you can load your own kernel module with no warnings popping up.