You Can’t See Me: A Mac OS X Rootkit Uses the Tricks You Haven’t Known Yet

Sung-ting Tsai and Ming-chieh Pan, researchers from Taiwan-based Team T5, take the floor at Black Hat Asia to demonstrate how tricky a Mac OS X rootkit can be.

Sung-ting Tsai: We are from Taiwan. We are from Team T5 Research. The topic of this talk is “You Can’t See Me: A Mac OS X Rootkit Uses the Tricks You Haven’t Known Yet”. Since more and more people start using Mac, attacking Mac OS has become a trend and we see more and more malware with advanced techniques. In order to gain persistent control and avoid detection, malware has started to adopt rootkit tricks. In this talk we are going to introduce several new rootkit tricks that cannot be detected by existing security software 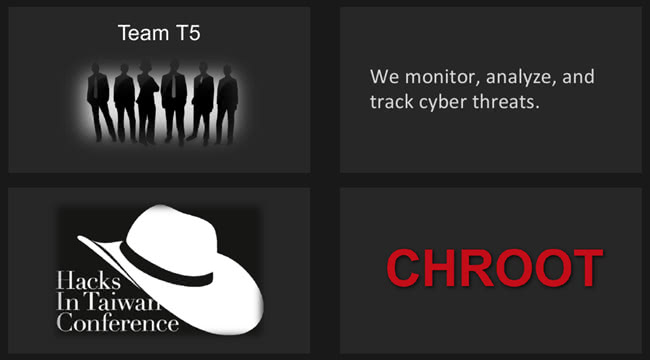 Nanika and me founded Team T5 Research in Taiwan recently. We are doing cyber threat research: we monitor, analyze and track cyber threats throughout the Asia-Pacific Region. We are also very interested in vulnerability research – not only the analysis of known exploits and vulnerabilities, we are also happy to look for new programs on new platforms or in new technologies. We are also members of CHROOT Security Group in Taiwan, and we hold HITCON every year. I’m the HITCON organizer. HITCON is the largest security conference in Taiwan, and we have about 800 attendees every year. 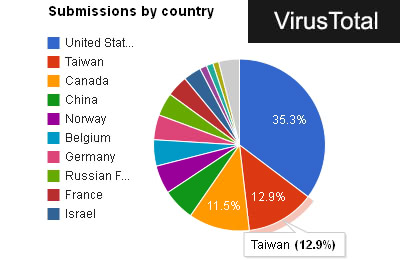 Many people say that Taiwan is a country without natural resources. Actually, it is wrong. Taiwan has the most abundant cyber attack natural resource in the world, especially APT and targeted attack samples. I think many APT researchers are eager to look for samples because it is not easy to get those. But it is not very difficult in Taiwan due to political issues. The picture is from VirusTotal (see right-hand image), and submissions from Taiwan rank #2 (www.virustotal.com/en/statistics/). So doing cyber threat research in Taiwan is interesting.

This is a short introduction of me (see image below). My name is Sung-ting, and you can just call me TT. I’m the leader of Team T5 Research. We like threat and vulnerability research. 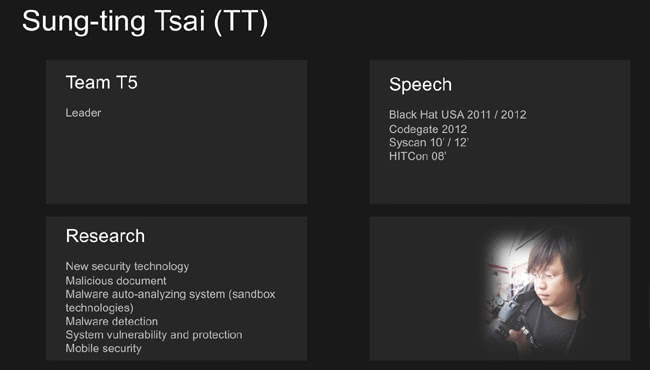 Nanika is our Chief Researcher (see image below). He is a well-known vulnerability researcher and has been disclosing new vulnerabilities for many years. His major areas of expertise include vulnerability research, exploit techniques, malware detection, mobile security; and he has discovered numerous samples in Windows system as well as document and application vulnerabilities. He has found many 0days and reported those to Microsoft before. In the recent years, we have started exploring and discovering problems on Mac OS. Nanika and me frequently do presentations in many security conferences. 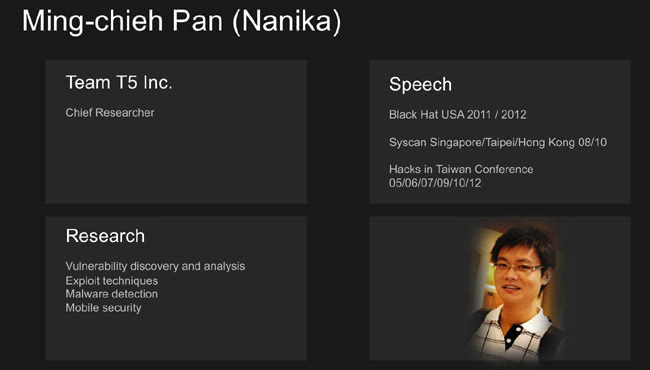 These (see image below) are the topics we are going to discuss today. We will show you some advanced process hiding techniques; how to become a privileged normal user; how to directly access kernel memory from user space. On Mac OS X 10.9, there are security warnings if you want to load third-party kernel module. We will show you how to load a malicious kernel module without warnings. And finally, I will show you a trick to gain root permission.

So, the first topic is Advanced Process Hiding. Let me introduce the Rubilyn rootkit. It was released for disclosure in 2012. 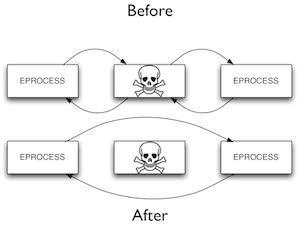 It had such capabilities as hiding a file, hiding a process, hiding a user, hiding a network connection, etc. So, yeah, it is very famous because it is open source and it shows people how to implement a rootkit on Mac OS. Also, it is already two years old and many people are still discussing this.

There are many features, but we are going to focus on process hiding. This is how Rubilyn hides a process (see right-hand image). It directly modifies kernel objects to unlink a process from the linked list. So it is a typical DKOM approach to hide a process. 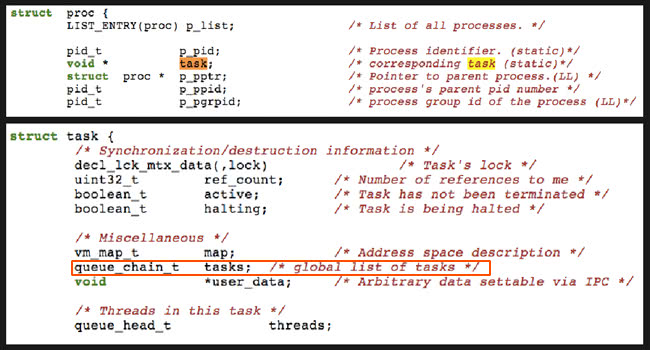 Read next part: A Mac OS X Rootkit Uses the Tricks You Haven’t Known Yet 2 - Detecting a Process Hidden by Rubilyn